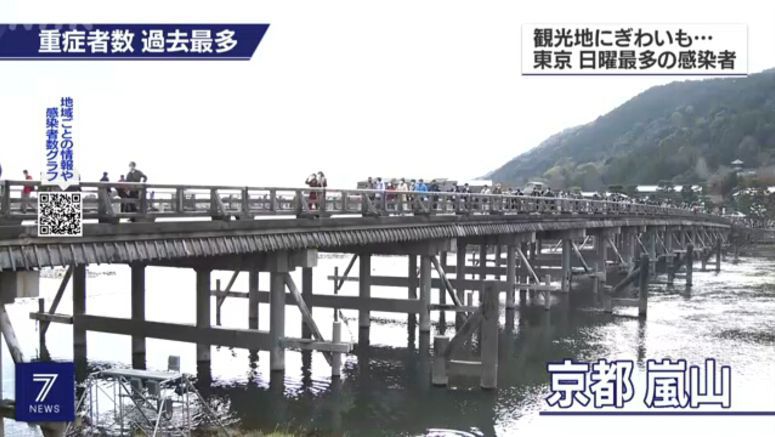 Sightseeing spots across Japan have been welcoming visitors on the first Sunday since the government declared the next three weeks as crucial to curbing the spread of the coronavirus.

Popular tourist attractions in Tokyo were mainly visited by local residents who had decided against long-distance travel.

At Tokyo Skytree, the tallest tower in the country, families enjoyed the view from the observation deck.

Visitors have their temperatures taken at the entrance and are asked to sanitize their hands. The number of people allowed in the elevators is limited, and air purifiers have been installed.

Ventilation on the observation deck has been strengthened to double the previous level. The air is replaced every 20 minutes.

The tower usually bustles with tourists from overseas and other parts of Japan at this time of the year, but the visitors on Sunday were mostly from the Tokyo area.

A woman in her 80s from Saitama Prefecture said there were fewer people than she had expected.

She also said she felt stressed that she couldn't travel much this year, and she visited Tokyo Skytree because it was near her home and she took thorough preventive measures.

Arashiyama, a tourist district in the ancient capital of Kyoto, attracted a large number of people who wanted to view the beautiful fall colors.

Visitors crowded the shopping area near the Togetsu-kyo Bridge on the Katsura River.

A man from Tokyo said he took advantage of the government's "Go To" tourism campaign to see the autumn foliage in Kyoto.

He said there were more people than he'd expected, so he is being extra careful.

Some shopkeepers expressed concern at the large crowds.

The owner of a shop selling bamboo souvenirs, Ishikawa Keisuke, said travelers seem to have switched their attention to Kyoto, as the nearby city of Osaka was excluded from the discount program.

Ishikawa said he is worried that bigger crowds could cause infections to spread and requests for business suspensions.