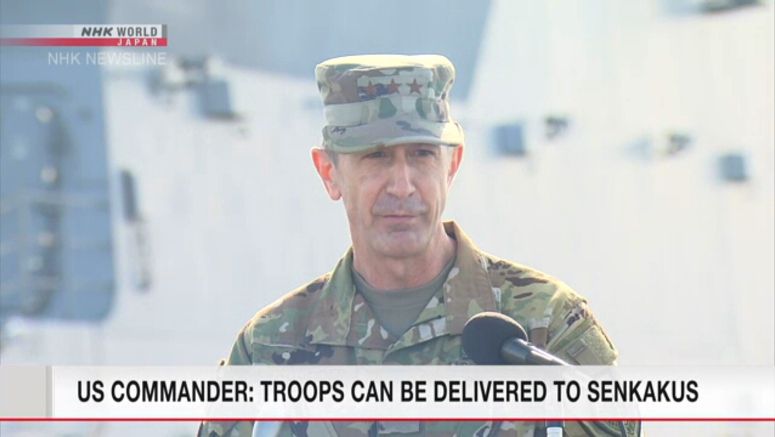 The commander of US forces in Japan has said the capabilities of Japan's Self-Defense Forces and the US military can be used to "deliver combat troops to defend" the Senkaku Islands in the East China Sea.

Lieutenant General Kevin Schneider was speaking to reporters on Monday aboard a Maritime Self-Defense Force destroyer.

Schneider touched on a large-scale joint exercise that kicked off on the same day.

He said the US military and Japan's SDF are working to "develop new and better ways to operate and further integrate exercises like this one."

He said such an exercise "clearly demonstrates the growing inter-operability of the US-Japan alliance."

Schneider said the countries' ability to transport personnel "can and could be used to deliver combat troops to defend the Senkakus."

Officials from Japan's Defense Ministry view his remarks as a warning to China, which has been stepping up its activities in waters near the Senkaku Islands.

Japan controls the islands. China and Taiwan claim them. The Japanese government maintains the islands are an inherent part of Japan's territory.

In July, Schneider pledged support for Japan over the islands. He said his country "is 100 percent absolutely steadfast in its commitment to help" the Japanese government with the situation.