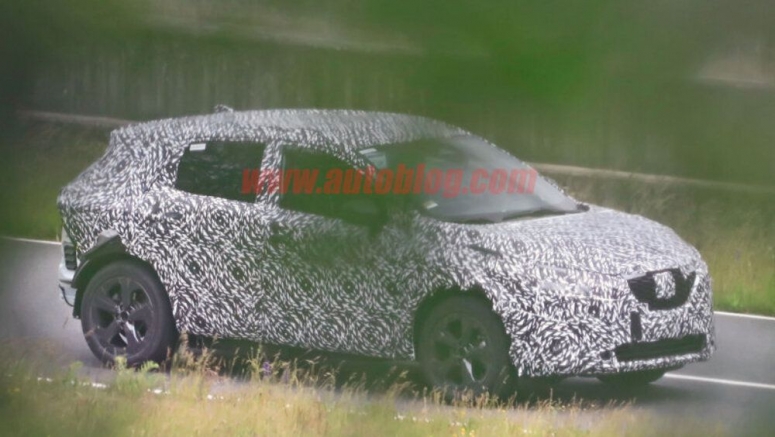 Nissan has teased the next Rogue Sport already, but today marks the small crossover's spy shot debut. Named the Qashqai in other markets, the Rogue Sport is one of Nissan's small, budget crossovers. It stands above the tiny Kicks, but is smaller and cheaper than the regular Rogue.

In case you're wondering why some of the photos have some green, blurry leaf marks on them, it's because our spy photographer literally scaled a tree to capture the shots on a test track that was certainly walled off with tons of security. Sure, it's a lot of work to capture a car as boring as the Nissan Rogue Sport, but we appreciate the effort nonetheless.

We can see a vague V-shaped grille on the crossover’s small face and some angular DRLs pointing and leading into the grille. This test car appears a bit unkempt and rough around the edges. Any of the car’s creases and protrusions are covered with camouflage in front, giving the car a rounded-off look. We have a feeling that the production Rogue Sport will be much more defined, similar to the current car.

There’s a semi-visible body line traveling down the side, but it all looks rather plain when covered up. Nissan has taken steps to disguise what’s going on around the C-pillar, too. A floating roof, perhaps? That doesn’t seem particularly far-fetched given Nissan’s design language as of late. The rear of one of the cars is missing a bumper, but it is visible on one of the other Rogue Sports pictured here. If anything, the rear glass is angled more than before, creating a more coupe-like appearance. A long spoiler hangs out over top of the glass, making the roof appear to extend further than it actually does. There are some funky wheel designs photographed here, but they’re all a little fuzzy due to the distance from the camera.

This car will likely be hitting our shores soon, but we're not sure how soon, since the Rogue Sport was lightly refreshed for 2020. Even though the Rogue Sport went on sale in the U.S. for the 2017 model year, the Qashqai has been sold elsewhere for a few years longer. That means the model is due for a total redesign. It’s currently powered by a 2.0-liter four-cylinder that channels 141 horsepower through a CVT. Nissan also offers all-wheel drive as an option. There could be a minor power bump incoming, and we can hold out hope for electrified offerings rumored for Europe, but it's unclear what Nissan has in store for the time being. Still, the Rogue Sport will likely retain its spot in Nissan’s lineup as the mature and staid small crossover, without any true sporting pretensions.