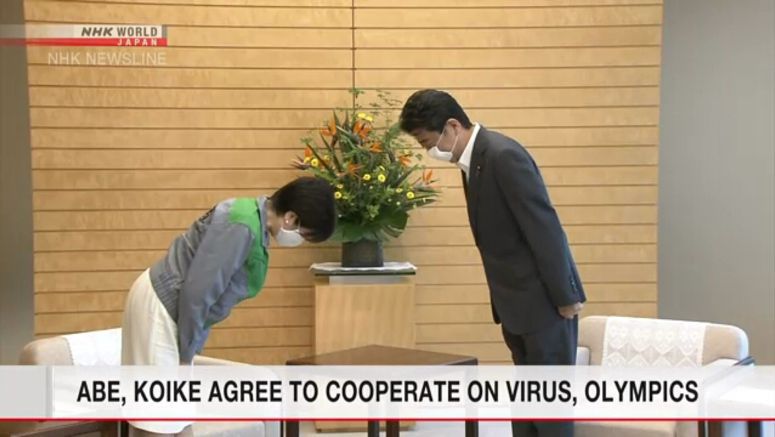 Japan's Prime Minister Abe Shinzo and reelected Tokyo Governor Koike Yuriko have agreed to continue working closely together to contain the coronavirus. They also affirmed their cooperation for a successful Olympic and Paralympic Games.

Abe congratulated Koike on her reelection and told her they need to cooperate more closely than ever over the pandemic. He said the spread of the virus must be watched closely, with a sense of the utmost urgency.

Abe said the fight against the infectious disease must be won to make next year's Olympics and Paralympics a success.

Koike responded that the most pressing issue is to contain the virus. She said Tokyo will meet the challenge in cooperation with the state and hold the Games next year as proof that the virus has been defeated.

The governor later told reporters that they confirmed that even though the capital has been seeing over 100 new daily infections, the number of serious cases is small and medical resources are now sufficient to cope with the situation.

She said the prime minister also explained the current state of vaccine development because the coronavirus is a global challenge to overcome before the Games.

She said Tokyo will also cooperate in supporting the development efforts.

Abe apologizes for past incorrect remarks to ...

Abe to speak at Diet on misleading remarks

SDF nurses sent to Osaka to help with virus s...