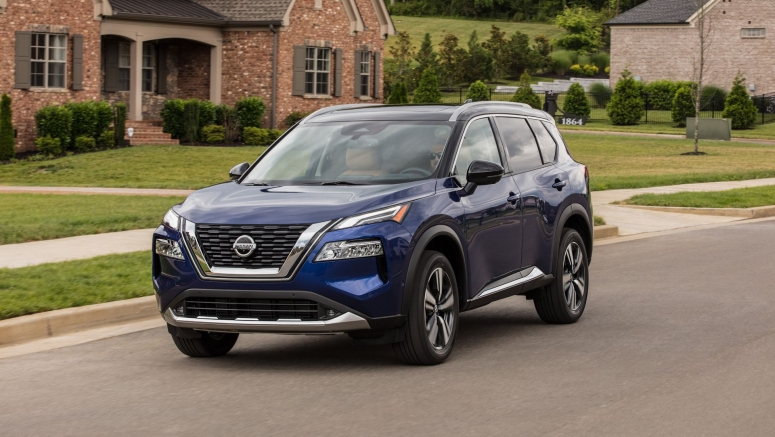 The 2021 Nissan Rogue is finally a competitive entry in this bustling crossover segment. While the last one sold well and made a good first impression, the more you drove it, the more disappointing it became. That's no longer the case for 2021, as the Rogue gains a much improved chassis, a touch more power and extra refinement that amount to a crossover that's considerably better to drive.

Nissan also punches above its weight with interior design. It's a modern and usable tech haven, assuming it's equipped with all the available goodies. Nothing about the exterior design is revolutionary, but the new Rogue looks confident and worthy of its price tag. It successfully manages to look both premium and rugged at the same time. Available features like tri-zone climate control and the Divide N Hide cargo system aim to separate it from mainstays like the Toyota RAV4 and Honda CR-V, but it's likely its expansive array of standard driver assistance technologies that are bound to make the biggest difference. Not only are more standard on the Rogue than on most competitors, they are well executed systems (that goes for the sophisticated ProPilot Assist option, too). Altogether, the new Rogue doesn't climb to the top of segment, especially since it doesn't offer a more powerful engine upgrade or a hybrid option, but it's much closer than before.

The Rogue is a totally new model for 2021. You can read all about what Nissan changed in our First Drive review.

The best element of the new Rogue is its interior, which is right at the top of its class in both design and quality. A number of two-tone interior color combinations are offered. The open pore "wood" is fake but convincing to the eye. The Platinum trim is adorned with contrast stitching on the doors, dash and the seats, which are covered in semi-aniline leather and feature Nissan’s incredibly comfortable "Zero Gravity" seat design front and rear.

The updated dash and center console consist of a pleasing combination of digital screens and physical controls. An 8-inch infotainment touchscreen is standard, but the top Platinum trim gets an upsized 9-inch screen. Apple CarPlay and Android Auto are standard with both screens, but the 9-inch screen comes with wireless Apple CarPlay. Lower grades get an analog instrument panel with a 7-inch display in the center, but the Platinum trim comes with a fully-digital 12.3-inch panel that's easy to read and moves through the various screens and menus quickly via steering wheel buttons. A large head-up display comes paired with the fully digital instrument panel, too. Other available features we like include a panoramic moonroof, tri-zone climate control, wireless phone charger.

The Rogue actually shrunk a bit for 2021, but it still measures up well versus other compact crossovers. Specifically, it's 1.5 inches shorter in length and 0.2 inch lower in height. The old model was actually quite big for its segment, though, and thankfully, interior space and utility don't suffer as a result. Quite the opposite. Rear seat legroom ticks up by half an inch, and the rear doors open wider (nearly 90 degrees) to make getting child seats in and out a simpler process (not to mention the children themselves). These upgrades add up to one of the more passenger-friendly back seats in the segment, one that measures up closely with the RAV4 and new Escape. The CR-V is still the overall winner in rear legroom.

Maximum cargo capacity (second row dropped) is up to 74.1 cubic-feet, a number that just barely trails the Honda CR-V for class best. Space behind the raised second-row is reduced by a token amount (to 31.6 cubic-feet), but at least it still has the innovative and useful "Divide-N-Hide" cargo floor (increases cargo volume to 36.5 cubic-feet) that consists of two movable floor boards — keep them in for a flat floor; remove them for additional depth, or arrange them into a stacked formation to divide the cargo area into separate parts. A new milk gallon holder aft of the wheels is built into the cargo area floor, so now your gallon of milk or whatever won’t annihilate the rest of your groceries on the way back from the store.